"Steinmetz says he gets off on tan lines." - Ashley (about her boyfriend to Ashley)

Ashley Freund is a minor character in the film Final Destination 3, where she is one of the survivors of the tragic rollercoaster incident which killed a number of her classmates. She and her best friend Ashlyn are the first two characters to die as death tries to take their lives after escaping their fates the first time.

During her onscreen time she is found to be known as one of the 'popular girls' along with Ashlyn.

Despite her status as a 'popular girl', Ashley does not follow the stereotypical mean girl attitude that is usually associated with the group. In fact Ashley is a rather kind-hearted and generous person towards her fellow students, this is shown when she came up to Wendy (who was miserable after her boyfriend died in the rollercoaster accident) and offered for Wendy to come tanning with her and Ashlyn to take her mind off things. She shows the emotional side of her again when she talks to Ashlyn about how they have to look their best for graduation as there are people who did not have the chance to make it, helping Ashlyn to calm down.

She is also quite playful and ditzy when around her friends (acting as a stereotypical blond), because of this she is often seen laughing and having fun, especially with Ashlyn. The ditzy side also shows through her poor judgment of situations. Despite the playful and kind attitude, she can be irritated by the perverse nature of her classmate. She is also shown to be quite impatient when waiting for the tanning salon manager to get off the phone, and also is quite defiant, ignoring or outright doing the opposite of what people tell her, and becomes sassy when spoken to about it.

There is one more dimension to Ashley's character that must be said. She cares very much for her appearance and is very confident with her body, as she will tan naked and often bring up how she and Ashlyn look 'Hot'. This has lead to her having a rather erotic and sexual mindset for a 17 year old as when Ashlyn asks, "Why are you wearing underwear?" (As they were suppose to tan naked), Ashley responds with "Steinmetz says he gets off on tan lines." This suggests that she and her boy friend (who does not appear onscreen) are in a sexual relationship.

Ashley has golden blonde hair that sits about bust length when out, throughout the movie her hair appears in two styles: without with side strands at shoulder length or tied up in a messy ponytail (when tanning). She also has blue eyes, thin eyebrows, a small nose, and light skin. Her face is a lot more rounded or oval-shaped than her best friends due to a wider chin and a less defined jawbone.

As far as her body goes, Ashley has quite a slender figure but not to the same extent as Ashlyn's. Here body shape is defiantly a lot more curvaceous than that of Ashlyn's and she has quite large hips and bust with a small waist and flat stomach, as can be seen she is defiantly and hourglass shape. She also appears to have large breasts at a size C, however they appear larger than Ashlyn's who are the same size, presumably due to the fact that Ashley's boobs have implants and thus are firmer than Ashlyn's which sag down a lot, this can be clearly seen as Ashley's boobs are very round and do not flatten why lying down.

Ashley comes dressed in a number of different outfits durning the course of the film, almost all of which are very sexualised. She first appears with matching blue tracksuit pants and a jacket cropped to expose a small portion of her midriff, under this she wears a tie died shirt as well as a blue thong which can be seen while sitting down. After the rollercoaster incident she is dressed a pink tided crop top exposing a much larger portion of her midriff with the caption "BLONDE" stylised on it, this is paired with a pink mini skirt, shin high leather boots and an oversized yellow jacket. Just before tanning she is seen wearing her underwear, a pink supported bra matched with pink panties, however she just wears the panties while tanning, taking off the bra to tan topless but not fully nude.

When Ashley and Ashlyn enter the tanning bed room, Ashley leaves her iced beverage on a table, unaware that the VAC machine controlling the tanning beds is right underneath it. Ashlyn decides to turn up the heater, stating that a few degrees won't hurt. Ashley then decides to look through the CD's on a wooden shelf above one of the tanning beds. While doing so, she accidentally pulls the shelf loose. As the temperature in the room rises, the iced beverage cup starts to condense and begins to drip onto the machine under it, causing it to malfunction. The VAC then rises and the two girls notice something is wrong when it starts getting too hot.

Ashley was dancing to the music on her iPod while Ashlyn was falling asleep. Over at the desk where Ashley left her drink, it started to condensate and form a small puddle. The water seeped over to the temperature box, and fit in through the cracks and caused a spark, making the beds warmer. After a few minutes, the girls started to sweat, but only Ashlyn noticed. The air was turned on, and knocked over a coat rack. Ashley took off her earphones. Ashlyn opened up her tanning bed and went to get up as the coat rack hit the shelf, which fit into the opening in the handle for Ashley's bed and the handle for Ashlyn's bed. Ashley banged her head against the lid of the tanning bed, which was sudden and unexpectedly not opening. The other side of the shelf fit in the now closed lid of Ashlyn's bed, and things started to get toasty.

Ashley started sweating and breathing hard, and her hair was sticking to her head. She was worried that someone was going to have to come in their and help them out. Ashley tried opening her bed again, and burned her hand against the top of the bed. The lights got very bright. Suddenly, Ashley started screaming as she was burning up. She winced panically as she struggled to get out of her bed.

Ashley tried getting out through the top, but a fan meant to keep the occupant of the bed cool blocked the way. On the other side was the wall. Panicking and burning up, Ashley screamed in alarm and banged against the bed. Suddenly, the glass above her exploded on her face, which sent thousands of tiny pieces of glass upon her, slicing into her skin. She screamed at the top of her lungs as she squirmed around. The bottom glass cracked and burst, sending Ashley to the bottom panels, possibly setting her on fire. While Ashley screams in sheer agony, and shaking violently, she felt the flames melt the flesh everywhere through her body, and her brain was being fried, as well as her heart. Ashley looked through the slot but the flames engulfed her. The fire set the entire tanning bed ablaze, with Ashley's blood-curdling scream echoing, as she burnt to a crisp.

In the bonus features of the Final Destination 3 movie, viewers get to 'decide the fate' of Various characters from the movie. If the viewer chooses to change the temperature that Ashlyn decides to set, the tanning bed scene will change to the alternative death. In this scene, the events that start the scene are the exact same up until the point where Ashlyn notices that the temperature is too hot.

In this version Ashlyn decides to get out earlier while Ashley remains in her bed which leads to Ashlyn getting knocked out by the falling shelf (which was knocked off by the coat hanger). The shelf then slides across the gaps in both beds, locking in Ashley while Ashlyn is unconscious on the floor. As the temperature rises, Ashley tries desperately to escape her tanning bed, pounding on the lid to try and free herself, but only to end up burning her hands each time. Desperately Ashley screams out for help but to no avail as Ashlyn is still out cold. At this point Ashley's skin burnt brown and shiny due to the sweat pouring out of her. A look of terror on Ashley's face as the glass above her cracks and shatters, slicing her face and chest, she lets out a loud shriek in pain.

Trying to slide through the end of the bed, Ashley screams for Ashlyn, shrieking "Somebody, help me!". Ashlyn finally starts to wake up to the screams of Ashlyn which are getting higher and higher, repeating her cry for help. Ashlyn quickly makes it to her feet and pulls the shelf out of the wedge in the tanning bed and opens the lid to a terrified Ashley, with her arms covering her chest and face to protect herself from the heat. Ashley's entire body burnt to a dark brown and her skin shiny with sweat. Ashlyn looks at her in shock of how burnt she, but Ashley just stares back in relief. Ashlyn extends her hand to lift Ashley up, Ashley grasps her hand in relief. As Ashlyn lift her up the extent of her injuries is clear, her chest covered in shards of glass and cuts from that glass. She is so badly burnt that her nipple have been incinerated off her breasts, leaving behind nothing in their place. As she is lifted out of the bed the glass under her shatters, exposing the live wires underneath. In an instant Ashley and Ashlyn are electrocuted, dying instantly, leaving Ashlyn's body on the floor and a steaming, burnt Ashley still in the tanning bed.

Steinmetz (no other name given) is Ashley's boyfriend. From what is mentioned it is known that they are in a sexual relationship and that he is physically attracted (or rather 'turned on') by Ashley's tan lines around the panty region but not the breasts, it is said that he "gets off" to them. In a quote from Ashley after being questioned as to why she wears underwear while tanning she says "Steinmetz says he gets off on tan lines". 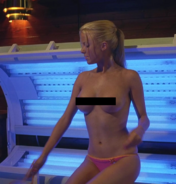 Add a photo to this gallery
Retrieved from "https://horror-movie-hotties.fandom.com/wiki/Ashley_Freund?oldid=284"
Community content is available under CC-BY-SA unless otherwise noted.